In 1967, the show that was promoted as an  ‘American tribal love-rock musical’ completely shattered conventions. Previously, any mention of homosexuality and nude performances would be far too outrageous to be displayed on stage. But HAIR’s hippie tribe resisted and fearlessly challenged customs, authority, expectations and the mighty American flag.

The racy show is set against the backdrop of the Vietnam War and we see a tribe of free-spirited, politically engaged friends who struggle against the harsh cruelties of the world.

The performance stationed counterculture on centre stage. And for the first time exposed audiences to polygamous and interracial relationships, drug taking, and anti-war objections. When first entering military-service men were ordered to cut their hair short; the title of the show and the long-haired actors was a symbol of defiance and the characters pacifist beliefs.

At its first showings at London’s Shaftesbury Theatre, many audience members left almost immediately and the show was banned by many for its anti-establishment themes and fully nude scene. Annabel Leventon who played Sheila in the original cast said: ‘Hair really shocked and changed the world of theatre’.

Striking. Sexual. Scintillating. HAIR IS BACK.

The revival began at Manchester Hope Mill Theatre in 2016. Now on tour, although time has muted much of the controversy, the energetic musical is bringing flower power magic to venues up and down the country.

Starring Dancing on Ice champion Jake Quickenden and Hollyoaks star Daisy Wood Davis, the ensemble are in full voice as they joyously sing an electric score of 60’s much-loved hits: ‘Let the Sun Shine’, ‘I Got Life’ and ‘Aquarius’. Combined with cool choreography by William Whelton, audiences are treated to a psychedelic performance that spectacularly embodies the spirit of the era.

Fifty years on, the show's message for tolerance, love, peace and diversity continue to be relevant today.

Time warp yourself back to the hazy ‘60s  and experience the Summer of Love. Book your tickets here today! 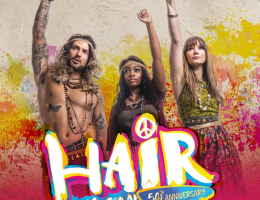