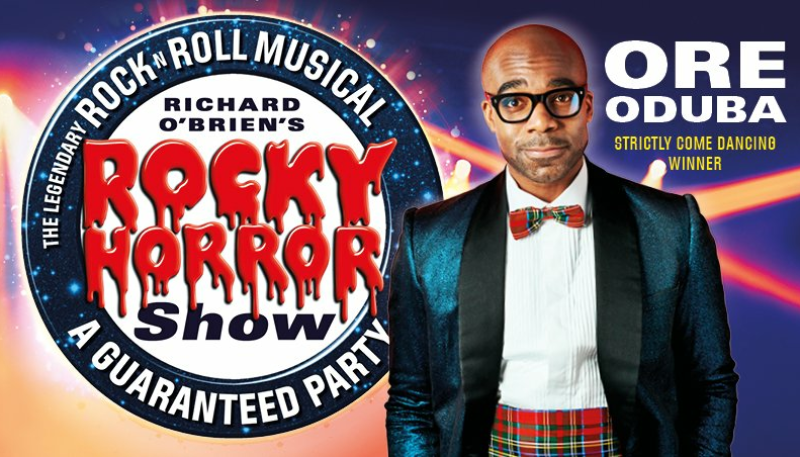 This interview took place earlier this year just before Ore began his debut in the smash hit musical The Rocky Horror Show.

As lockdown eases and theatres begin reopening, Ore Oduba believes The Rocky Horror Show is just the tonic audiences around the country are in need of. “Theatregoers are gagging for a great night out,” says the Strictly Come Dancing champion, who stars in the legendary musical when it hits the road this summer. “They’re desperate and clawing at the walls, and this show is the perfect remedy to everything we’ve all been through. People want to laugh and be uplifted and to be able to forget about everything for a couple of hours. It’s all about ‘Leave your inhibitions at the door - we haven’t got time for that'.”

In the risqué and riotously funny show, Ore plays squeaky-clean Brad Majors - who, along with his fiancée Janet Weiss, inadvertently cross paths with mad scientist Frank-N-Furter and his bunch of outrageous followers. Cue fun, frolics, frocks and frivolity, classic songs like The Time Warp and Sweet Transvestite, and Oduba in various states of undress.

The TV and radio presenter, musical theatre star and possessor of the coveted Strictly Glitterball Trophy was quick to say yes when the offer to play Brad came in, although he did consult with his wife first. “It’s such an iconic show and so well-loved,” says the man who has been married to TV researcher Portia since 2015, “but I thought ‘I wonder what my wife is going to say about audiences seeing me in stockings’. I needn’t have worried because what I’d forgotten is that Rocky Horror is one of her and her family’s favourite shows of all time. She was beside herself.” Ore laughs. “She also started chuckling at the idea of me being on stage in just my briefs for the early part of the show, then coming out later in stockings and high heels.”

Can he relate to the nerdy character whose visit to Frank-N-Furter’s castle proves to be an inhibition-shedding experience? “I think there’s a lot of Brad in me and in a lot of people,” the 35- year-old admits. “It’s the idea of being kind of caged animals, because we all have a lot of reservations and inhibitions and things we hold back. We’re just waiting to be unleashed.” Not that Oduba has ever been the shy sort. Born in London and raised in Dorset, he studied sports and social sciences at Loughborough University before his first job as a sports broadcaster in Edinburgh. In 2008 he joined the Newsround team before going on to present BBC Breakfast, Radio 5 Live and The One Show among many other credits.

Partnering with Joanne Clifton on the 14th series of Strictly Come Dancing in 2016, he jived his way to victory, then both performed in and hosted Strictly live tours. He has continued to work as a presenter as well as branching out into musical theatre, playing crooner Teen Angel in the 2019 Grease UK tour and songwriter Aaron Fox in the 2019/2020 tour and West End production of Curtains.

Doing theatre feels like things have come full circle for Ore, since one of his proudest moments was when at age 13 he won the school drama prize for his performance in the musical Seven Golden Dragons. “Then at secondary school I did every production under the sun. It was only when I went to university that I turned my attention to broadcasting, but Strictly reminded me ‘Oh my gosh, I love being on stage’.​ “On the surface doing musical theatre now might seem like a big change-up but when I look back to where I felt happiest and most comfortable when I was younger it was always on stage. In many ways it’s kind of what I always wanted to do. After Grease and Curtains, Rocky Horror is another step up in my so-far short musical theatre career and a lovely chance for me to do something liberating, fun and a little bit different.”

Doing The Time Warp won’t be a problem for Ore. He has kept up the dancing since Strictly. “And I took up tap dancing, although my wife and I then decided to renovate the house and turn the garage I was practising in into a kitchen. So I no longer have my tap space. Blame it on the kitchen! But every time I get to do something involving choreography it gets me as excited as I was when I did Strictly. I love it.”

Nothing he did on the show was as outrageous as donning fishnets and high heels. “We did wear Latin heels but they’re not as high as the ones I have to wear in Rocky Horror. I remember the first time I was asked to wear something a little bit sheer on Strictly and I thought ‘I don’t want to be too much of a show pony, I want it to be about dancing’. But by the time it came to the end I was like ‘You can put me in whatever you want’.”

Since it premiered in 1973 at The Royal Court’s Theatre Upstairs, Richard O’Brien’s Rocky Horror Show has grown into a worldwide phenomenon, has been seen by over 30 million people worldwide who turn up for what is the ultimate guaranteed party. It has always been on Ore’s radar. “It’s one of those things you grow up knowing about and we did The Time Warp at every school disco or wedding.” As for the musical’s longevity nearly 40 years after it debuted, he reckons: “It’s pure escapism. You  leave your troubles at the door and you’re taken into a world that’s nothing like the real one. In addition to iconic music and brilliant dance numbers, it’s just such a feel-good show.”

Being on the road means he won’t get to see much of Portia and their three-year-old son Roman. “For my little boy it’s heart-breaking that daddy sometimes has to go away to work for periods of time,” Oduba admits, “but it’s about managing it and making the most of that time together when I’m at home. Having said that, I have been at home pretty much non-stop for more than a year now.” He laughs. “My wife will be the one pushing me out the door. She can’t wait for me to get back out on the road.”

The Rocky Horror Show plays Theatre Royal Brighton from 29th November to 4th December 2021 and then tours across the UK in 2022! You can buy tickets here. 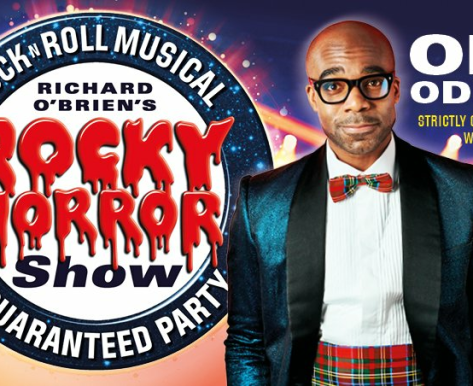