This month a number of cut songs and demos from Waitress the Musical will be released in a new album. The album will be entitled 'What's Not Inside: The Lost Songs From Waitress'. The NEW album, What's Not Inside: The Lost Songs From Waitress, will feature seven unreleased tracks from Waitress. The songs are "Happy Enough," "Door Number Three," "Knocked Up You," "Without a Believer," "I Can't Wait," "Falling in Love Pie," and another version of "She Used to Be Mine."

The album will be released this week on Friday 16th August 2010.
Waitress tells the story of a young woman stuck in a small town, an abusive marriage, a dead-end job, and now faces an unwanted pregnancy. Long-time coming to British venues, Waitress the musical is a modern story you'll love! The show is currently showing in the West End at the Adelphi Theatre, with bookings until January 2020. The current cast features Lucie Jones, Marisha Wallace and Laura Baldwin.
Book your tickets for Waitress the Musical HERE! 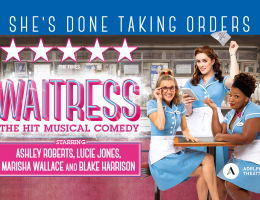