Last night we popped along to the Liverpool Empire for the opening night of Club Tropicana. The sun was shining and as we sat down with our pre-show drink in hand, we could already tell we were in for a great night! Club Tropicana made its debut in January and has been spreading the summer feeling across the country ever since. The musical has been described as 'the 80s take on Love Island' but we can confidently say, we’d much rather be at the theatre with this lot – than stuck in front of our TV sets watching ITV2.

The show is packed full of all our favourite anthems from the 80’s decade, including songs such as Just Can’t Get Enough, Take On Me, The Look Of Love, Girls Just Wanna Have Fun, Relax and many more! So the story goes as follows - girl ditches boy at the altar and heads off on the honeymoon with her girls. Boy heads out on a lads holiday to 'get over' the heartbreak, however, coincidently ends up at the same hotel as his ex.... Welcome to Club Tropicana. Club Tropicana is a Spanish hotel which hosts an unusual mix of characters. There's chaos, comedy and music - the perfect cocktail for a wild night.

Joe McElderry plays the entertainment manager Garry and is full of brilliant innuendos. His timing was great and it was clear the audience equally enjoyed the jokes as much and his musical number.

Ex-Sugababes Amelle Berrabah was wonderful. You would have never guessed Amelle was making her stage debut in the show.  Playing the role of hotel manager Serena, both her acting and voice were of an incredibly high standard.

Kate Robbins played the hotel maid Consuela. She was not only ours but, judging from the laughs from the audience, everyone's favourite part of the show. It's been a long time since I've heard a whole auditorium laughing uncontrollably - but for Robbins it seemed almost effortless.

Club Tropicana is showing at the Liverpool Empire until Sat 06 Jul. 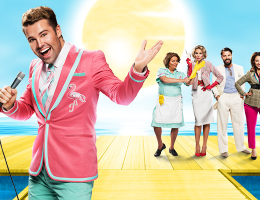 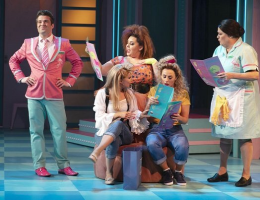