“The draft is white people sending black people to fight yellow people to protect the country they stole from the red people.” – Hair The Musical

It's the 50th anniversary of Hair the Musical and it’s a celebration you won’t want to miss. This love-rock, hippie musical takes you on a psychedelic trip back to the 60’s to a key point in history for the hippie youth of America. The opening scene introduced ‘the tribe’ who had long hair, floral clothing, bandanas, and bare feet. The show jumped straight into a number of musical acts which introduced that characters and set the tone of the show.

With themes of race, politics, protest, war, drugs, nudity and sex – we can only imagine the shock for audiences back when the show was first released. However, whilst in current times that shock factor isn’t there, it doesn’t mean we still can’t appreciate the show for what it was and the statement it made. The plot was simple, the dialogue was minimal and although some may feel this was a weakness in the show – we would definitely argue that the plot was secondary to the incredible music and staging.

Paul Wilkins plays the role of Claude, a torn individual unsure about acknowledging his patriotic duty in Vietnam or if he should be resisting the draft and burning his card. His performance was strong, engaging and charming.

Jake Quickenden plays the exceptionally flamboyant and free-spirited Berger. His character was interesting to watch – from experiencing his crass humour to seeing his darker more tormented side, his presence on stage definitely stood out.

Daisy Wood-Davis plays the loving student activist Sheila. Her performance was delightful and her softer voice felt like a relief in-between the more boisterous acts.

Marcus Collins brought a real force of energy to the stage as Hud, his vocals and acting were marvellous. Even though there was a technical hic-up during his opening number, his entire performance was faultless.

Aiesha Pease, who played Dionne, lead the vocals in the opening scene Aquarius. This performance sent a message to the audience straight away that we received loud and clear – that this show has some incredible talent and they aren’t here to mess around. On the whole the show has some amazing talent, staging and music. So, relax and enter the theatre with an open mind and we can guarantee it’ll be a night to remember!

Hair – The Musical is at the Liverpool Empire until Saturday. Get your tickets HERE. 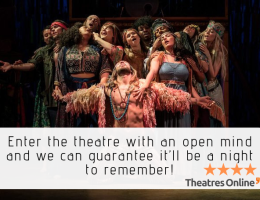