X-Factor finalist Lucie Jones and Pussycat Dolls’ Ashley Roberts are set to join the West End cast of smash-hit musical Waitress from next month on the 17th of June.

West End actress Lucie Jones will be taking on the lead role of Jenna.  Jones’ has an incredible reputation and her theatre credits include Cosette in Les Misérables (Queens Theatre), Maureen Johnson in RENT (The Other Palace and national tour), Elle Woods in Legally Blonde (national tour), Holly in The Wedding Singer (national tour), Victoria in American Psycho The Musical (Almeida), Molly Jensen in Ghost: The Musical (Asian tour) and Meat in the We Will Rock You (world arena tour). Ashley Roberts will be making her West End debut as Dawn, temporarily taking over the role from Laura Baldwin.

Waitress tells the story of Jenna, a waitress and expert pie maker who dreams of a way out of her small town and loveless marriage. A baking contest in a nearby county and the town’s new doctor may offer her a chance at a fresh start, while her fellow waitresses offer their own recipes for happiness. But Jenna must summon the strength and courage to rebuild her own life.

Get your tickets NOW for Waitress showing at the Adelphi Theatre, London until 19th October 2019. This is one West End show you won’t want to miss. 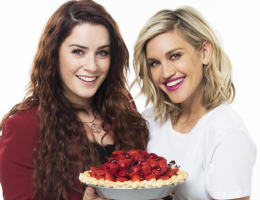