Cast announced for film adaptation of Broadway musical The Prom

Cast announced for film adaptation of Broadway musical The Prom

Hit stage musical The Prom is going to be adapted into a Netflix movie by Ryan Murphy. The film is set to be released late 2020 and tells the story of four down-and-out theatre actors who head to Indiana, where they help a teen whose prom was canceled when she tried to bring her girlfriend as her date. The star cast has been announced this week and it looks like it’s going to be a good one! The movie will include Nicole Kidman, Meryl Streep, Ariana Grande, James Corden, Keegan-Michael Key and Awkwafina.

There is now call out across the US for an actress to play Emma, the teen at the centre of the story.

Production on The Prom will reportedly begin in December. The Broadway musical will close on Sunday, Aug. 11. However, rumours are still circulating about a West End transfer… 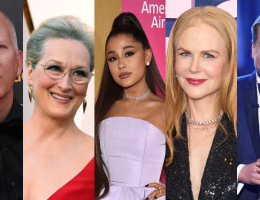