The full cast has been announced for the 2019 UK tour of Blood Brothers. Blood Brothers is international hit musical presented by Bill Kenwright and written by Willy Russell. This tragic musical tells the tale of two brothers separated at, however, meet again later in life with devastating consequence.

For the final time, the sensational Lyn Paul will be playing Mrs Johnstone. Joining her will be Joel Benedict as Eddie, Danielle Corlass as Linda, Danny Taylor as Sammy and Chloe Taylor as Mrs Lyons. Alexander Patmore returns as Mickey alongside Robbie Scotcher as the narrator. The rest of the cast for Blood Brothers includes Tim Churchill, Graham Martin, Gemma Brodrick, Hannah Barr Graeme Kinniburgh, Shaun McCourt and Connor Bannister.

The show will be opening this month at the  Cork Opera House before heading out on tour to Canterbury, Liverpool, Cardiff, Birmingham, Derby, Hull, York, Crewe, Hastings and Dartford. 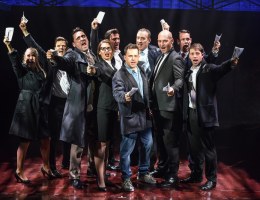