Full casting has been revealed for the immersive West End production of The Great Gatsby.

A bespoke facemask has been designed for patrons to purchase if needed, and a portion of proceeds will go to the Theatre Artists Fund. Temperature checks will take place throughout the Immersive LDN venue, with deep cleans in place between shows.

Producers Louis Hartshorn and Brian Hook said: "We're delighted The Great Gatsby is returning to its London home. We're deeply proud of the team who have worked so skilfully and passionately – with input from the Culture Task Force, Equity, and Westminster – to welcome back our audiences and restore some of the cultural offering in London that has been missing for far too long.

"We are really excited to welcome folks back to Gatsby's mansion in a responsible and measured way, and to be one of be the first shows in the West End that is able to re-open its doors to fans. At Immersive LDN we will always lead the way with innovation, and we're hoping this can be a blueprint to help our other productions around the world begin to open.

"We've definitely missed telling this beautiful story each night. It has been a joy to bring back some of the original creators of Gatsby after half a decade, to revisit, revive and augment the production, with new scenes and new choreography that should be exciting for fans old and new."

TIckets for the show are on sale now 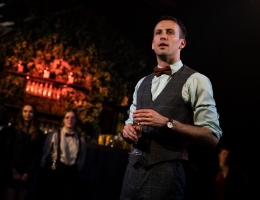