My Best Friends's Wedding The Musical Tour Announced For 2021

My Best Friends's Wedding The Musical Tour Announced For 2021

Michael Harrison and David Ian announced today rescheduled dates for the world premiere of MY BEST FRIEND’S WEDDING THE MUSICAL. Starring Alexandra Burke as Julianne Potter, the show will open at the Manchester Palace Theatre on 20 September 2021 ahead of a UK and Ireland tour. Further casting will be announced in due course.

MY BEST FRIEND’S WEDDING is based on the wickedly funny film of the same name and features some of the most iconic pop anthems ever written by the legendary Burt Bacharach and Hal David, including I’ll Never Fall in Love Again, I Just Don’t Know What To Do With Myself, Walk on By, I Say A Little Prayer and What’s New Pussycat.

The musical will have a book by Ronald Bass (My Best Friend’s Wedding, Rain Man, The Joy Luck Club) and Jonathan Harvey (Beautiful Thing, Gimme Gimme Gimme, Coronation Street). Alexandra Burke most recently played the role of Rachel Marron in the hit musical The Bodyguard having played the role to critical and audience acclaim in both the West End and the subsequent sell out 2015/2016 tour. She first rose to fame after winning the fifth series of The X Factor and her debut number one single Hallelujah sold over one million copies in the UK, a first for a British female soloist.

She most recently appeared as Svetlana in Chess at the London Coliseum and as Roxie in Chicago at the West End’s Phoenix Theatre. In 2017 she reached the final of Strictly Come Dancing. Her other theatre credits include Deloris Van Cartier in the national tour of the musical Sister Act.

Fiery food critic Julianne Potter has always turned her nose up at romance. It’s the reason she broke up with her sweetheart Michael O’Neal. When she hears he’s about to be married, she vows to win him back for good, but with perfect Kimmy in the way, it’s not as easy as she first thought. Can she derail her best friend’s wedding in time and keep Michael all for herself?

MY BEST FRIEND’S WEDDING is directed by Rachel Kavanaugh. It has a book by Ronald Bass and Jonathan Harvey and is based on the Tristar Pictures Film, screenplay by Ronald Bass. It Features the songs of Burt Bacharach and Hal David.

Keep an eye out on our socials for news 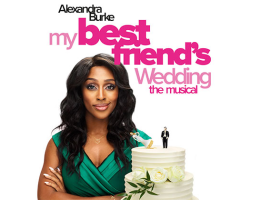