A brand new comedy, The Comeback, will open in the West End in December.

Written by and starring award-winning comedy duo The Pin, the show will run at the Noël Coward Theatre from 8 December to 3 January! The show which is directed by Emily Burns and produced by Sonia Friedman Productions, follows two rival comedy duos having a backstage tussle, with a special guest star joining the production every night.

The venue has been adjusted to adhere to the latest government guidelines, with a 1m gap between all bubbles.

The Comedy duo said: "We've done one-off gigs in venues of a similar size (like the Old Vic's birthday celebrations) but we've never done a month-long run in the West End. That's what's keeping us up at night: not fearing not doing it but more the excitement. We just hope the microphone system is working..."

Friedman said: "I am absolutely thrilled to be announcing The Comeback as SFP's return to the West End. I was excited about The Pin's debut play long before lockdown, but after the year we've had, it feels like the perfect tonic. More than ever, we need the laughter and emotional connection of communal experience – and frankly, nothing provides that like live theatre. The Comeback delivers all that and much more."

She added: "This genius comedy shows just how precious live performance is and, as British theatre begins to build itself back up, becoming a frontline of the national recovery, The Comeback couldn't be more timely. Theatre isn't just for Christmas. This is just the start."

Tickets go on sale soon! with over 1000 tickets available at £25 or under each week. 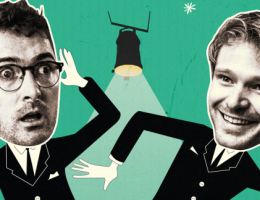