Blood Brothers first came to West End in 1983 and now, in 2019, the show is still filling out theatres and bringing audiences to tears. This week we caught the show at Blackpool Opera House and although it wasn’t our first-time experiencing Blood Brothers – it has to be our favourite. There really aren’t many shows out there worthy of multiple visits but Blood Brothers is certainly one of them.

Written by Liverpudlian playwright Willy Russell, Blood Brothers is set in the 60’s and tells the story of twins, Mickey and Eddie who are separated at birth and separated by class. Eddie lives a life of privilege whilst Mickey lives with his struggling birth mother, Mrs Johnstone, in a deprived area of Liverpool with his seven unruly siblings. Despite both mothers’ best efforts to be keep the boys apart, Mickey and Eddie’s paths manage to cross repeatedly over the years, without either twin discovering the truth. However, as the boys grow up and realise life isn’t a game anymore - the truth is revealed in a dramatic conclusion.

The show is renowned for and studied because of its strong themes of superstition, social deprivation, class, inequality, violence and depression. Over the years these issues seem to still be as relevant as ever which merits such a moving and thought-provoking experience for the audience.

The music, story and set were marvellous - all brilliantly working together to fully immerse the audience. What really made the show stand out was the spectacular cast.

Robbie Scotcher who played the narrator was great and would seamlessly jump from being the main focus on the stage to merging into a scene and never breaking character. The performances from Alexander Patmore as Mickey and Joel Benedict as Eddie were spectacular. Extra credit must be given to Patmore for really embracing the role of Mickey and perfectly portraying the effects of his downfall. Linzi Hateley, who played Mrs. Johnstone the struggling single mother, was truly captivating. Both her voice and performance were world class and utterly faultless.

Whilst the show is quite dark and tackles some serious issues, it is balanced with lots of humour. You definitely find yourself on a whirlwind rollercoaster ride of emotions – but don’t worry, it isn’t a ride you’d want to get off.

As the final scene ended there were unsurprisingly tears from both audience and cast however, they were not tears of sadness. Instead, just pure emotion coming from a group of people that had just experienced something magnificent and incredibly powerful.

The show is on in Blackpool until the 27th April and continues its tour in Liverpool, Birmingham and York. So, if there's just one show you watch this year, make it be Blood Brothers! Regardless of if you’ve seen it before – we can promise you won’t regret it. 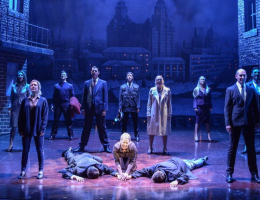