Royal Opera House to stream LIVE concerts for the first time since lockdown!

Royal Opera House to stream LIVE concerts for the first time since lockdown!

The first, co-hosted by the venue's director of music Antonio Pappano and Anita Rani from the BBC on 13 June at 7.30pm, will go behind-the-scenes at the Opera House and feature musicians and artists, all socially distanced from one another.Works from the likes of Benjamin Britten and George Frideric Handel will be performed, with turns from stars including Louise Alder, Toby Spence and Gerald Finley. The Royal Ballet's resident choreographer Wayne McGregor will also present a new intimate piece, with the full show being completely free.

The second and third shows, on 20 June and 27 June, will be available on-demand for £4.99 and feature ballet and opera created by The Royal Opera, The Royal Ballet and the Orchestra of the Royal Opera House.

You can find out more here. 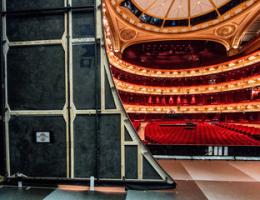