The RSC will release an audio recording of Juliet Gilkes Romero's 2019 play The Whip.

The play has taken on a newfound resonance and will be released to coincide with Black History Month. The piece is set to re-unite the shows original cast and will be directed by Kimberley Sykes with sound design by Claire Windsor and music by Akintayo Akinbode.

The show will premiere on 29th October and be available to watch on the RSC YouTube Channel.

The 2014/2015 cast of Tom Morton Smith's Oppenheimer will also unite for a one-off reading on 15 October. The piece commemorates the 75th anniversary of Hiroshima and Nagasaki.

Erica Whyman, RSC deputy artistic director said: "The epic nature of the subject matter and the broad sweep of narrative that Juliet Gilkes-Romero's The Whip and Tom Moreton-Smith's Oppenheimer deal with is something we have always encouraged in our commissioned new work.

"Telling untold stories, exploring issues of power, responsibility and personal identity through the lens of a group of remarkable human beings, navigating their own place within a changing world, is at the very heart of what Shakespeare wrote about. By continuing our commitment to new writing, we hope to channel that same enquiring spirit through some of the most promising voices of today." 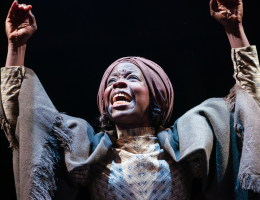