Famous senior citizens have travelled to some of the most exotic countries and now the stars of BBC hit TV series The Real Marigold Hotel are touring the UK.

Starring actor Wayne Sleep and Paul Nicholas, singer Sheila Ferguson, TV chef Rosemary Shrager and former Darts player Bobby George, these VIP travellers have promised to reveal all from their adventures. From laugh out loud embarrassing stories to never-been-seen before clips, the live show is packed full of entertainment.

Sheila Ferguson said: “After travelling around the world and experiencing so many different and exotic cultures with ‘Marigold On Tour’, then seeing the amazing effect it’s had on everyone who saw the various episodes, it’ll be my extreme pleasure to share more experiences around the country with live audiences.”

Catch the opening show at Cheltenham Town Hall on 16 October. Further dates can be found below. Stay tuned as tickets go on sale soon! 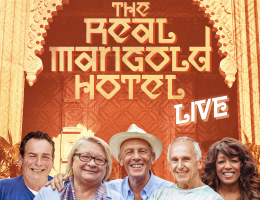