Theatre News: Touching the Void will transfer to West End

Joe Simpson's famous memoir Touching the Void which has been adapted into a brilliant and clever play will be transferred onto the West End at the end of the year.

The play is directed by Tom Morris (War Horse) and was written by David Greig (Europe). Touching the Void was first premiered at the Bristol Old Vic last year with an incredible response. Due to the success, it was then transferred to the Royal Lyceum in Edinburgh and Royal and Derngate in Northampton.

The story follows Joe Simpson and is set in 1985 in the Peruvian Andes. Joe and his friend, Simon Yate, who are climbers find themselves in trouble when they are stranded on the side of a mountain and are forced to make some impossible decisions in order to survive.

The show is set to run at the Duke of York's Theatre for a limited time, from 9th November 2019 until 29th February 2020 and tickets are on sale NOW!

Book your tickets for Touching the Void in the West End HERE! 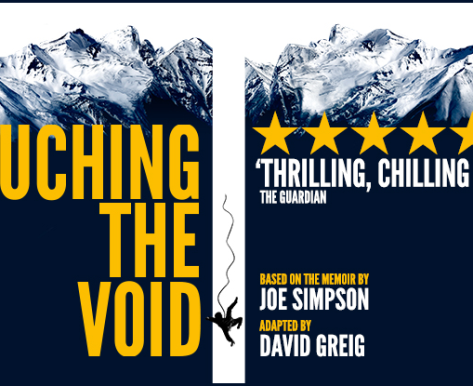