UK Tour Cast Announced for On Your Feet! Musical

UK Tour Cast Announced for On Your Feet! Musical

On Your Feet! the musical has been playing this summer at the London Coliseum and is about to embark on a UK tour.

The casting for the UK tour has now been announced. On Your Feet! will open at the Birmingham Hippodrome theatre on the 3rd September 2019.

The tour will include members of the London cast, who have been performing in the West End run this past summer. Philippa Stefani will continue to play the role of Gloria Estefan, George Ioannides as Emilio Estefan, Madalena Alberto as Gloria Fajardo and Karen Mann as Consuelo.

ON YOUR FEET! is the inspiring true love story of Emilio and Gloria and charts their journey from its origins in Cuba, onto the streets of Miami and finally to international superstardom.

This exhilarating musical features some of the most iconic pops songs of the era, including Rhythm Is Gonna Get You, Conga, Get On Your Feet, Don’t Want To Lose You Now and 1-2-3. Directed by two-time Tony Award® winner Jerry Mitchell (Kinky Boots, Legally Blonde), with choreography by Olivier Award-winner Sergio Trujillo (Jersey Boys) and book by Academy Award® winner Alexander Dinelaris (Birdman).

It has also just been announced the show will return to London for a new run in 2020.

Book your tickets for On Your Feet! HERE. 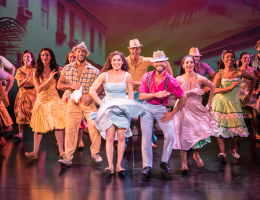