The award winning smash hit musical is back in the UK! The tour will open at Portsmouth Kings Theatre on 2nd May 2021, before visiting Birmingham, Edinburgh, Manchester and more with even more dates to be added!

Rock of Ages is an LA Love story lavished with over 25 classic rock anthems! Loose yourself in a city where the only things bigger than the hair are the dreams- which can come true! This hilarious musical comedy will have you laughing and singing along to rock classics such as Here I Go Again, We Built this City, I Want To Know What Love is and more!

Dubbed by The New York Times as 'Absurdly enjoyable, as guilty as pleasures get, impossible to resist' The show promises the BEST PARTY IN TOWN features a spectacular cast and an awesome live band! 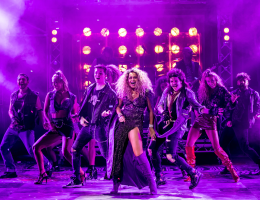