Reading / Shows / Anton and Giovanni - Him and Me

Anton and Giovanni - Him and Me @ Hexagon Theatre

The Strictly Come Dancing stars unite for a UK tour

Du Beke joined the show upon its launch in 2004. From then, the ballroom and Latin dancer partnered with the likes of sporting coach Judy Murray and supermodel Jerry Hall, and first reached the final with newscaster Katie Derham in 2015. He repeated the feat with stage and screen actress Emma Barton four years later. It was however his comedic partnerships that secured him the hearts of the nation, not least reaching the quarter final with former MP Ann Widdicombe in 2010.

Born in Sicily, Giovanni Pernice joined Du Beke on Strictly Come Dancing in 2015, quickly making his mark by reaching the final with actress Georgia May Foote in his first series. In 2017, he repeated that success with presenter Debbie McGee, and again in 2018 with Steps member Faye Tozer. Pernice's professional achievements include claiming the top prize at the Italian Championships in 2012.

In 2020, Anton Du Beke and Giovanni Pernice announced that they would hit the road together across the UK in June and July 2021. It was revealed that the Him & Me tour would be directed by Alan Burkitt, who had previously choreographed Strictly Come Dancing, So You Think You Can Dance? and the Fascinating Aida UK tour.

Speaking at a photoshoot ahead of the tour, Pernice said to Du Beke: "Anton, you are my idol. I have wanted to do a show with you for so long now and I’m very, very happy that we can finally do it."

"Well, I’m really excited about this," Du Beke responded. "It’s going to be fabulous and I already feel younger just standing next to you Giovanni. I can’t wait!”

The Him & Me tour was confirmed to kick off in Shrewsbury on 17 June, running through to Reading on the 22 July 2021. 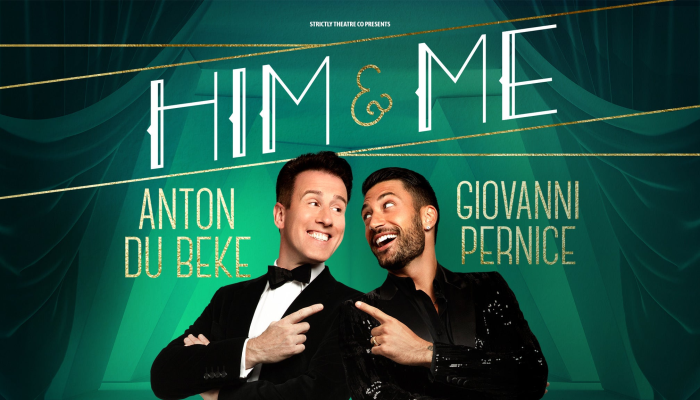 Anton and Giovanni - Him and Me @ Hexagon Theatre